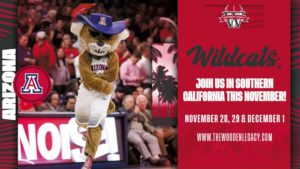 Less than four months away from tip-off of the 2019-20 college basketball season, it appears Arizona might start the season ranked in the Top 25.

The Wildcats check in at #15 in the latest ESPN.com Way-Too-Early Top 25, highest ranked team in the Pac-12.

See what ESPN’s Jeff Borzello had to say about the Wildcats:

While other rosters settled down over the past month, Arizona had plenty of movement. Devonaire Doutrive entered the transfer portal, then decided to return to the Wildcats. Point guard Alex Barcello also announced he was transferring. ESPN 100 prospect Terry Armstrong elected to pursue professional options — as he was in danger of not qualifying. There are also questions about Brandon Williams‘ health moving forward. So the Wildcats are still in some flux entering the summer. But what’s not in question is the talent. Top-10 prospect Nico Mannion and Josh Green enter the fold, while UC Irvine grad transfer Max Hazzard brings shooting. Top-50 recruit Zeke Nnaji could surprise some people, and Chase Jeter was productive last season.

To view the complete bracket and schedule for the 2019 Wooden Legacy click here.