The 2021-2022 season marks the start of the second century of collegiate basketball for San Diego State which finished its 100th season with a 23-5 record and winning the Mountain West Conference’s regular- and post-season championships.

The Aztecs have captured a league-high 14 conference titles, have finished champion or runner-up in 13-of-22 Mountain West Tournaments.  Since 2006, SDSU’s 12 appearances in its conference championship game is tied for the second most in the nation with Belmont and New Mexico State.

Brian Dutcher returns for his fifth season as he is the only head coach in program history to record 20-plus wins in each of his first four season with a 96-31 record.  In addition, among first time head coaches whose first season guiding his program was 2017-18, his 96 victories are the most and are seven more that the next highest total.

Seniors 6-10 forward Nathan Mensah and 6-3 guard Trey Pulliam are Aztec starters returning.  Mensah and Pulliam were honorable mention All-Mountain West selections last season as both played in all 28 games a year ago, with Mensah starting 27 times and Pulliam getting 28 opening nods.

Bradley scored over 1,292 points in three seasons at Cal before transferring to San Diego State as he averaged 18.0 points and 4.6 points per game last season for the Bears after producing 10.4 and 17.5 scoring norms in his first two seasons in Berkeley.

Believed to be the first Aztecs basketball player to hail from the Dominican Republic, the 6-7 Baker Mazara averaged 9.5 points a game in 2020-2021 in 15 games for Duquesne.  A 6-9 forward from Mali, Diabate did not play at Portland last season after averaging 6.4, 5.7 and 9.6 points per game in the previous three seasons for the Pilots.

Prior to playing Georgetown in the Paycom Wooden Legacy on November 25, the Aztecs opening their 2021-2022 schedule with home games versus Cal Riverside (November 9), Arizona State (November 18) and Texas Arlington (November 20) and a road contest at Brigham Young (November 12).

San Diego State will be playing in their fifth ESPN Events in-season tournament as the Aztecs have finished first (2013) and second (2017) in two Paycom Wooden Legacy appearances, and second (2012) and first (2016) in two Hawaiian Airlines Diamond Head Classics. 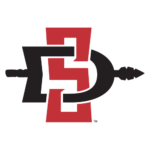