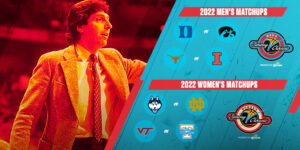 ESPN Events has announced the matchups for the 2022 Jimmy V Men’s and Women’s Classic Presented by Corona. The men’s college basketball doubleheader at Madison Square Garden on Tuesday, Dec. 6 will feature Duke vs. Iowa and Texas vs. Illinois, while the women’s event will include UConn at Notre Dame and Virginia Tech at Tennessee at campus sites on Sunday, Dec. 4.

Both men’s games will air on ESPN. UConn/Notre Dame will be broadcast on ABC while Virginia Tech/Tennessee will air on ESPN2. The Huskies-Fighting Irish meeting on ABC marks the first Jimmy V Classic game to air on ABC. Both men’s and women’s start times will announced at a later date.

Similar to the men’s field, all four women’s programs advanced to the NCAA Women’s Basketball Tournament in 2021-22, including UConn, which returned to the National Championship game. The Huskies have won 10 of their 11 all-time appearances in the Jimmy V event. This year marks UConn’s sixth head-to-head matchup against Notre Dame, which is hosting the Women’s Classic for the third time. Tennessee played the event in 2002 and 2004, while Virginia Tech is making its first appearance.

The Jimmy V Classic, named for legendary college basketball coach Jim Valvano, annually raises money and awareness for the V Foundation for Cancer Research. The men’s classic began in 1995 and is in its 28th year – 19th at Madison Square Garden. The women’s event debuted in 2002. Both events are part of ESPN’s V Week initiative, which utilizes platforms to talk to sports fans about the importance of cancer research. To date, ESPN has helped raise more than $155 million dollars for the V Foundation. In 2021, V Week raised $13.35 million, surpassing the previous high of $8.8 million in 2019.

Tickets for the men’s doubleheader will go on sale this fall. First priority and access to the best seats will be offered to fans who sign up for the pre-sale through Fevo. Tickets for the women’s games will be managed by the host schools.

About the V Foundation for Cancer Research

ESPN Events, a division of ESPN, owns and operates a portfolio of collegiate sporting events nationwide. In 2022, the 32-event schedule includes three early-season college football kickoff games, 17 college bowl games, 11 college basketball events, and a college softball event, which account for approximately 400 hours of live programming, while reaching nearly 64 million viewers and attracting over 800,000 annual attendees. With satellite offices in more than 10 cities across the country, ESPN Events builds relationships with conferences, schools and local communities, as well as providing unique experiences for teams and fans.