Florida State, LSU to Meet in 2023 Kickoff Game in Orlando 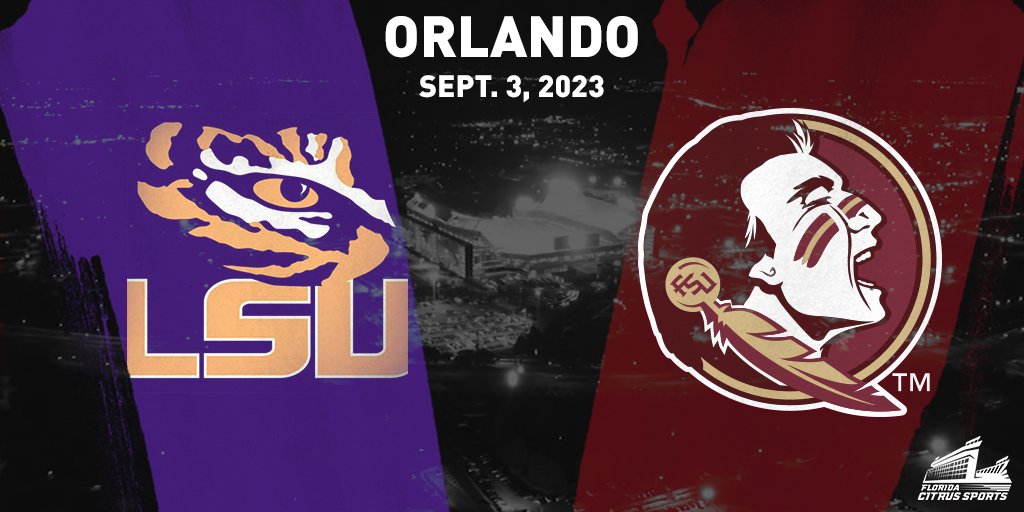 The matchup will be the fourth in a series of major neutral-site games held in Orlando as part of the Florida Citrus Sports-ESPN Events partnership. Camping World Stadium previously hosted kickoff games in 2016, 2018 and 2019, including a matchup between Florida State and Ole Miss on Labor Day 2016.

“We are so excited to bring yet another thrilling kickoff game to Orlando, and we look forward to hosting college football fans from around the globe for this unbelievable matchup,” Florida Citrus Sports CEO Steve Hogan said. “Events like these have a profound impact on the Central Florida community, and we can’t wait to show the student-athletes, coaches, families and supporters of our longstanding partners in Tallahassee and Baton Rouge what makes Orlando one of the country’s top neutral-site destinations.”

The Tigers and Seminoles have not met on the gridiron since 1991, and Florida State holds a 7-2 all-time lead in the series, which began in 1968. Prior to squaring off in Orlando, the teams will also meet in a 2022 kickoff game at the Mercedes-Benz Superdome in New Orleans.

“LSU and Florida State are two of college football’s most iconic brands, and we look forward to renewing this series,” said Pete Derzis, ESPN senior vice president of college sports programming and ESPN Events. “When scheduling neutral-site games, our goal is always to provide fans and viewers an incredible matchup, and we feel we’ve done exactly that with this highly-anticipated event.”

LSU is coming off the program’s fourth national title after defeating Clemson in the 2020 College Football Playoff National Championship in January. The Tigers are 2-3 in five previous bowl appearances in Orlando, a run that includes Citrus Bowl victories over Louisville (2017) and Wake Forest (1979).

“Our team looks forward to playing Florida State to open the 2022 and 2023 seasons,” LSU head coach Ed Orgeron said. “To play a traditional power like Florida State is a challenge that excites our team. Playing in New Orleans and Orlando is a great opportunity for us to showcase to recruits the LSU program.”

Florida State is 9-0-2 in 11 previous contests in Orlando, a run that includes neutral-site victories over Memphis, Virginia Tech, Notre Dame, Duke and Wake Forest between 1990 and 1996

The Seminoles’ first visit to Central Florida came in 1952, a 6-6 tie with defending Tangerine Bowl champion Stetson. Florida State’s first Orlando bowl appearance came in a victory over Texas Tech in the 1977 Tangerine Bowl, and Florida State tied Georgia 17-17 in 1984 in their only other appearance in what is now known as the Vrbo Citrus Bowl.  The ‘Noles also won the 2008 and 2011 Champs Sports Bowls over Wisconsin and Notre Dame, respectively.

“We are very pleased to officially announce these games, which will provide great trips for our fans,” Florida State athletics director David Coburn said. “The two games will also allow our coaching staff to show off our program in areas where we recruit heavily, and it adds another Power 5, out-of-conference opponent to our schedule. I would like to thank the staff at LSU, with whom we worked hand-in-hand to make this happen. I also want to thank our partners at the Sugar Bowl, Florida Citrus Sports and ESPN for their help and support in making this high-profile series happen.”

Ticket information will be announced at a later date. Florida Citrus Sports members will receive priority access to tickets. To learn more about becoming a member, call 407.423.2476 or visit FloridaCitrusSports.com.