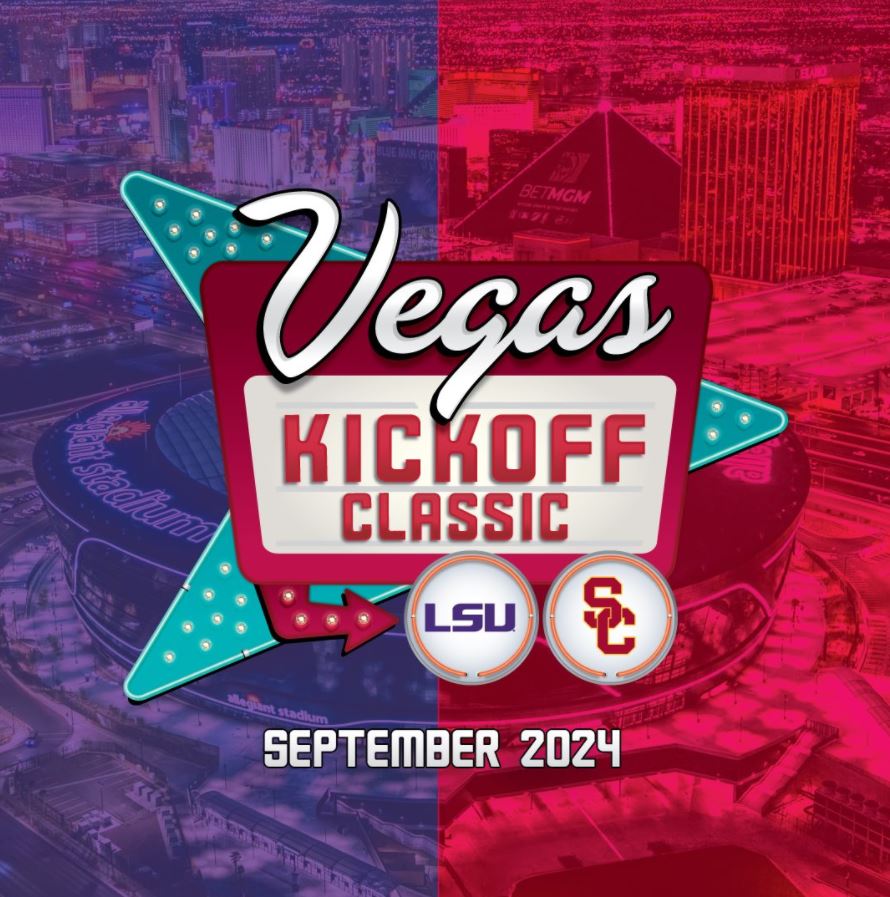 LAS VEGAS – USC and LSU, two of the nation’s powerhouse football programs, will headline the Vegas Kickoff Classic at Allegiant Stadium in 2024. The neutral-site game will take place over Labor Day weekend, airing on ABC or ESPN. Date and time will be determined at a later date.

“We are excited to announce this historic matchup that is sure to attract the sports world’s attention,” said John Saccenti, Vegas Kickoff Classic and SRS Distribution Las Vegas Bowl executive director. “Las Vegas is known for its big events and the Trojans vs. the Tigers kicking off the 2024 college football season at Allegiant Stadium may be the biggest game the state of Nevada has ever seen.”

USC (Pac-12 Conference) and LSU (Southeastern Conference) have met only two times previously as the Trojans defeated the Tigers in Baton Rouge, Louisiana, in 1979 before LSU took the rematch in Los Angeles in 1984. LSU has never played a game in the Silver State, while USC appeared in two Las Vegas Bowls (2001 and 2013) played at Sam Boyd Stadium.

“We are excited to participate in a matchup that will certainly be the marquee season opening game of the 2024 season,” said USC athletic director Mike Bohn. “It is a priority for us to deliver games that will energize our fans, and we are thrilled to bring this event and opponent to the west coast in a world-class facility and attractive location for our supporters. When our players choose to be Trojans, they know they will get to experience competition on the nation’s grandest stages, and this historic Vegas Kickoff Classic will be yet another such opportunity.”

“The opportunity to bring our team and the best fans in college football to Las Vegas is incredibly exciting,” said LSU athletic director Scott Woodward. “We cannot wait to compete on the field and fill Allegiant Stadium with Tiger fans from across the country.”

The 2024 event will be the second Vegas Kickoff Classic, following this season’s inaugural matchup sponsored by Good Sam and featuring Arizona vs. BYU on Saturday, Sept. 4 at Allegiant Stadium. Tickets for the game can be purchased by visiting www.lvbowl.com. Anyone purchasing tickets for this year’s game will be added to the pre-sale priority list for the 2024 Vegas Kickoff Classic.

Located adjacent to the world-famous Las Vegas Strip, Allegiant Stadium is a global events destination, highlighted by the arrival of the NFL’s iconic Raiders in 2020. Allegiant Stadium, which won “Best Venue” honors at the 2020 World Football Summit Industry Awards, is ideally located for both visitors and locals, fully enclosed and climate-controlled with a capacity of 65,000. The technologically advanced stadium will host world-class entertainment including concerts and sporting events such as the Pac-12 Championship Game and Las Vegas Bowl and serves as the home of UNLV Football. The stadium project is expected to generate an economic benefit of $620 million annually while creating 6,000 permanent jobs in Southern Nevada. For more information on Allegiant Stadium, visit https://www.allegiantstadium.com/.