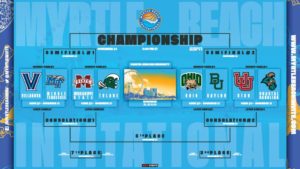 The matchups for the second annual Myrtle Beach Invitational have been released. The event, hosted by the American Athletic Conference, will be played November 21, 22 and 24 at the HTC Center in Conway, S. C.

Villanova, which has participated in the NCAA championships 14 of the past 15 seasons with national titles in 1985, 2016 and 2018, headlines the 2019 Myrtle Beach Invitational field. The Wildcats have captured the last three BIG EAST titles.

Baylor and Mississippi State also earned at-large bids to the 2019 NCAA tournament. Coastal Carolina, whose HTC Center is hosting an in-season tournament for the third-straight year, also competed in the post-season with an appearance in the 2019 College Basketball Invitational.

UCF from the American Athletic Conference captured the title at the inaugural Myrtle Beach Invitational. The HTC Center also hosted the 2017 Puerto Rico Tipoff when the event was moved to the South Carolina coastal resort due to Hurricane Maria.

Owned and operated by ESPN, all 12 games of the 2019 Myrtle Beach Invitational will be televised on ESPN2, ESPNU, or ESPNEWS. All times are listed in Eastern Standard Time.